This month is all about Animal & Flavour matches. What’s your flavour animal? Read on…

This type of Dragonfly is found in the Northern wetlands of Australia. What animal represents the dance of life better than a Dragonfly? This species is one of the world’s most stunning. Short lived as adults they are all young by definition. Clouds of them can be found flickering and bounce over the sparkling fresh water, a refreshing zing in the hot languid tropical air. Watch them zig and zag; the sun playing spun gold off their wings as they shimmer in pursuit of insects and each other.

Notes: Dragonflies are short lived, yet sparkle and dance in the light. Simple yet elegant and airy. Serious in their function but seemingly carefree in their short flight season. 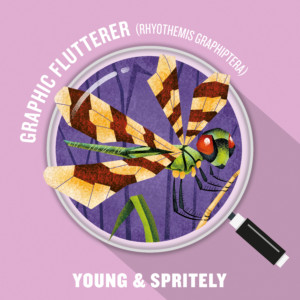 Big doe eyes, wide yellow beak, metallic green plumage on the back with a red breast what’s not to like about this well named bird? They’ re pretty laid back too. Sitting perched up for long periods, blending into the greenery of the tropical forest, they don’t particularly like flying. Slow and lackadaisical when they thoughtfully turn their heads or take flight on soft rounded wings. Everything about them is mellow and chill. While they will eat insects and the occasional lizard, they prefer to fill their wide bill with forest fruits .

Notes: They look sweet almost cartoon character. Inoffensive and very slow moving, soft fluffy plumage and wings say rounded and mellow as is their nature. Mellow and relaxed and for extra sweetness think of their diet of figs, berries and avocado.

This is a large dark species of American butterfly, a flouncy and soft insect that wafts around seeking sweet nectar during those warm sugary summer days. However try finding the caterpillar and you’ll have to delve deep into the Sassafras or Spicebush (their main food plants). Not only does the aromatic foliage leave the experience playing on your senses but the caterpillar does too – give one of these snake mimicking insects a gentle poke and it’ll evert a weird bright red, glossy forked organ (called an osmeterium) from the back of their heads – which fills the air with a buttery smell.

Notes: sweet smelling, seeker of sweetness and yet with an edge – they also feed on plants famous for spicy aroma . My recollections of looking for these fabulous and iconic caterpillars was a nose filled with fabulous smells.

Digging in the dusty and dry soil of a Madagascan forest is a creature that feels familiar in many respects yet is a stranger to most.  A refreshing combination of features belong to this Tenrec, part shrew and a little bit hedgehog. They’re a neat yet pugnacious little predator, a mouth full of needle-sharp teeth is matched by a coat of spines made of modified hairs covering their back, and their warning sound – a dry rattle is made by rubbing specialised quills on their back together. If this is ignored it will raise its Mohican and head butt its attacker, leaving you full of nasty little splinters.

Note: Hot and dry habitat but the sounds of spines rattling together as well as their tooth chattering and ticking sounds all create a ‘dry’ feel, the ‘spice’ to me is represented by the fact that such a creature can pack a bit of a punch. Getting the microscopic splinters out of your hands afterwards is something you’ll never forge 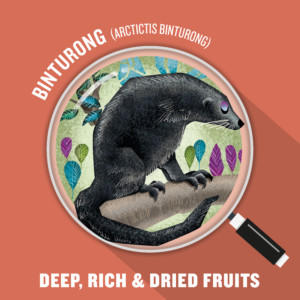 A heavy and hairy tree loving mammal from South East Asia. This is the largest civet and for its size it is surprisingly dexterous and agile. While not one to skip through the trees of the Southern Asian forest it doesn’t plod e

ither but moves with a surefooted, and steady gait. It is territorial and you know when you’re sharing the forest space with a Bearcat (it’s other popular name) as you’ll get the whiff of sweet, baked goods, from the recreations it uses to mark its territory –  some say it smells a bit like buttered popcorn? (The only Binturong I’ve sniffed was tucking into a pile of figs and so I will always associate this most enigmatic of mammals with a sweet fruity smell) In the wild – while they will eat almost anything they can get their paws into – fruits are however high on the list.

Notes: This large animal has a certain wisdom and depth of character to it, to me it is the spirit of the Asian rainforest, a warm, rich, complex and productive place. Depth is represented by the various complexities of the flavours of life and the fruitiness is what springs to mind when I think of what they feed on – figs are a favourite.

Although they are the largest land animals, they have grace, depth and nuance. These sensitive souls have a long life (60-70 years) as deeply textured as their skin. They are the longest living land mammals after humans and like us they have a use after they’ve stopped breeding, they pass on the wisdom of their teachings to the younger generation. Despite being heavy weights, they have surprising subtleties and can move with stealth, grace and poise through bush and woodland. Watch an Elephant and there is always something going on.

Note: They don’t get any older, or dignified. Always interesting, have great depth and roundedness. Character of individual. 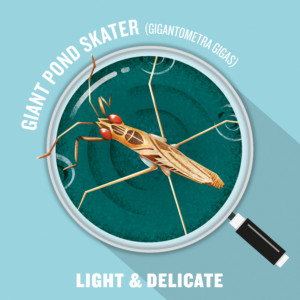 They don’t come more exquisitely elegant than this animal – so perfectly minimalistic that it can rest on that thin skin between water and air – the surface tension of pools. The biggest of this familiar group of insects is a rare beast found in forest pools in Asia.  Its spindly leg span is around about 30 cm and it uses four of its six to row, skim and flick around in search of other insects that have become ensnared. The reason the pond skaters don’t sink is that they not only spread the little weight they have over a large area, but they are covered in a fine downy water repellant hair – like magic non-wettable velvet.

Note: Easy and light, skipping over the surface. I think of freshness and sparkle of summer by a pond.

Brown bear is a survivor; an adaptable, charismatic character that is found in many habitats throughout the Northern hemisphere. A large strong and robust animal of wild woods and plain. Intelligence and wit and a dependency on a deep knowledge and understanding of their environment are determining characters that allow them to track with the seasons and the availability of food – whether fruit, berry, leaf or beast.

While they can be fierce for the most part, they are gentle souls that integrate power and wisdom in one harmonious whole.

Note: Sumptuous mossy deciduous woodland, A big powerful experience but with a sweetness associated with its nature and its diet. 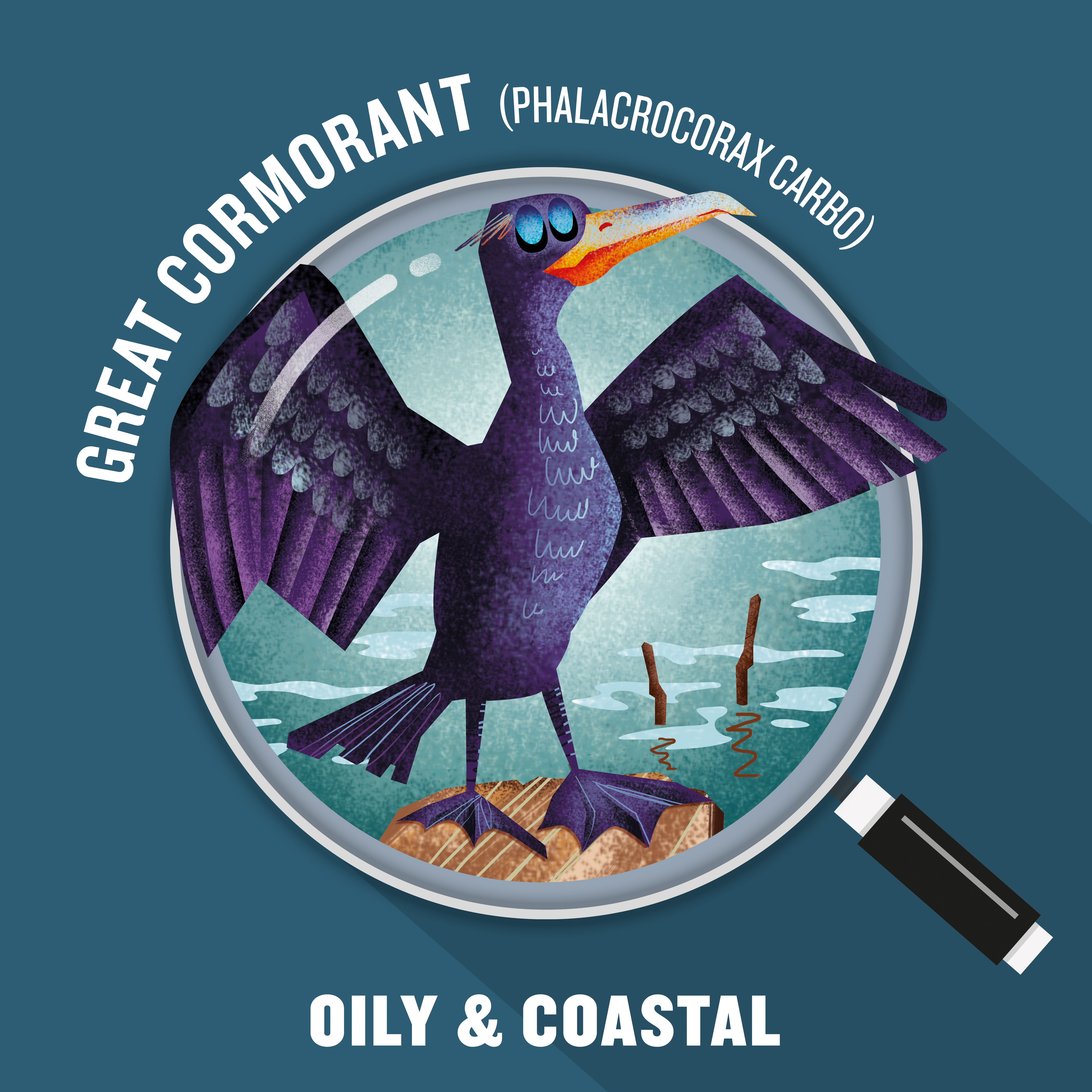 This is a bird strongly associated with the marine environment. Sinuous and salty. They sit low in the water when hunting; flicking down to the depths to catch fish. When they are not fully immersed in the brine, they inhabit a world of rocky cliffs, beach and boulder. Their black plumage doesn’t have the oil proofing of most other birds as this would make them too buoyant – so you’ll often see them sitting wings outstretched to drip dry and icon of the coastal environment. Their plumage often looks slick and oily when wet but when it chances the light it dazzles with a polychromatic light show of subtle greens and blues.

Notes: Salty associations, simple at first taste but gets more complex the more you get to know it. Oily is the appearance of the wet feathers and plumage. Their association with coastal environments reflects quite a lot of the taste characters of this category

The name Salamander is derived from the Persian words meaning “fire within”. This amphibian is an animal that is soft and smooth, a creature of dark and dank places and not the inferno of legend and yet while a largely benign beast of the half-lit habitats it does have an edgy surprise.

Lift a smouldering log to reveal one and its bold, zesty colours contrast with the dankness and come pinging through. Here is an animal that comes with a gentle warning. It’s only when you get close that it gives away a sharper essence within its skin glands (and the packaging has warned you – bright contrasting colours in nature are an advertisement for danger) a gentle tang of the defensive alkaloids,  they keep it clean and free from disease and disaster – a little taste of the fire within?

Notes: I think damp soil, smouldering heavy darkness but with high lights and warmth coming through the gloom – the fact this animal has both the colour and the chemicals mirrors the hint of the phenols in a lightly peated malt. The hint of TCP is a clean taste – salamanders are clean and neat. 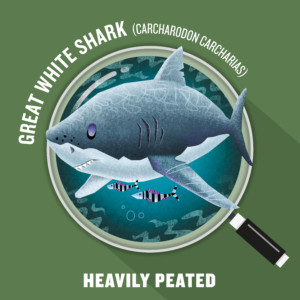 An adult bull moose, in full antler, is a noble force of nature, when a male at its peak proudly holds its head high it can stand at around 2 meters at the shoulder and weigh over 700 kg it’s a mighty animal, a heavy weight. Big and unmissable It might have a gentle soul, feeding on succulent plants and living in the wet wilds of wood and swamp, but it is strong, independent and stoic. Just like its flavour profile, its stubborn and headstrong and there’s no getting away from it once its mind is made up. Just try crossing one in the rutting season. A moment with a moose is one that stays with you and memory with longevity.

Notes: More powerful still, the peated flavour of the dankness of the world of woods and moss and moist soils are very much where this animal comes from. The powerful taste is reflected in the size and presence of the animal – stubborn powerful flavours.

It’s an animal that cuts its way through the water, it has a refined class and commands respect. Find yourself face to face with one – all of your senses are focused on it, just like those phenols there’s no room for any other distraction. Not an experience for everyone – to some it’s just too dangerous; for others it’s a beast of sublime and powerful beauty.

Notes: The peat cuts though everything, most heavily peated whiskies (that I’ve tried) have a paleness to them and watery appearance. Out Shark inhabits this element and is master of it. The phenolic taste dominates and cuts through quick and sharp. Both words I would use to describe this shark … when you’re faced with one, you can’t take your eyes off them and they change your understanding of life.

May Outturn is live from Friday 1st May, midday AEST. Want to join up? Become a member of the world’s best whisky club today.