The humble wooden oak cask. The vessel to which changes everything in whisky. What do some of those words on the label describing it mean however?

Barrel? Hoggie? Butt? These words all refer to the size of the cask, as opposed to the previous fill or usage. That’s a discussion for another time. In the meantime, let’s dissect the main four you’ll see in Scotch whisky maturation.

Let’s start with the mighty barrel, often considered the gold standard for Scotch whisky maturation. Barrels are made from charred American white oak and generally imported to Scotland by way of bourbon distillers in America. In America, whiskey such as bourbon must be aged in new oak casks whereas in Scotland it’s perfectly acceptable, and far more common, to age Scotch in used oak casks.

At roughly 200 liters, the barrel is one of the smallest casks for Scotch whisky maturation. As a rule of thumb, the smaller the cask, the greater the ratio of wood to liquid. This increases the degree of influence that the wood will have on the spirit in a given period of time. Because of this, Scotch whisky distillers will generally age their spirit in barrels for no more than 15 years, defaulting to larger casks for longer maturation.

At The Scotch Malt Whisky Society, we are always looking for casks that offer unique flavours and characteristics compared to what you might find on the shelf at your local whisky shop. Luckily, we’ve been able to mature a number of bourbon barrels for a greater length of time, offering an intense concentration of flavour for members to experience. Cask G4.18 ’The paradise patisserie’ is an example of a whisky matured in a second-fill bourbon barrel. After 29 years in continuous maturation in this humble ex-bourbon cask, we start to see classic notes of a bourbon barrel; toasted caramel, vanilla and citrus peel.

The Hogshead is one of the most popular if not the most popular types of casks used for aging whisky in Scotland today. Its approximate capacity of 238 liters makes it slightly larger than a barrel, reducing the degree of influence that the wood will have on the spirit inside it. Hogsheads can be made from American or European oak but the majority of these casks found in Scotland today are American oak. In fact, most hogsheads are made by breaking down the bourbon barrels imported from America and using the staves to assemble the larger cask.

Hogsheads are great for Scotch distillers who want to create a whisky with a more spirit-driven character. When it comes to peated whisky, I tend to lean toward those that are matured in hogsheads over barrels. There are pros and cons to both but with a hogshead, the smoky note is less restricted than it would be with a more influential cask such as a barrel.  Cask 66.141 ‘Roofing felt on a beach hut’ is a perfect example of a bold and intense whisky whose properties have not been diminished due to significant cask influence. 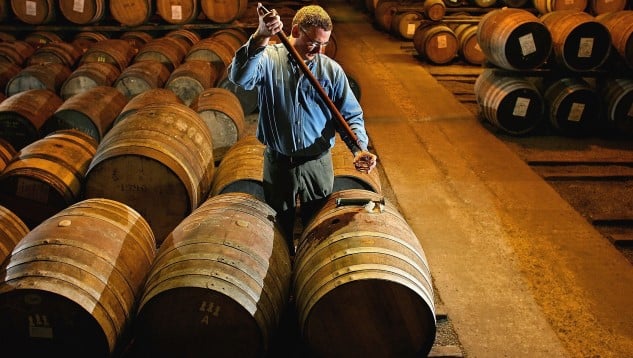 While barrels and hogsheads represent the majority of casks aging whisky in Scotland today, there is another type of cask that seems to be on the rise: the barrique. The barrique, which simply translates to “barrel” in French, has become the standard cask used for making wine. The majority of barriques are imported from France with a heavy concentration from Bordeaux. The Scotch whisky industry has been experimenting with both red and white wine barriques for decades but in recent years, perhaps as the results of French wine and spirits companies taking ownership of major distilleries, the barrique is earning its place among the more traditional casks used in Scotland.

At 225 liters, the barrique falls just between the barrel and hogshead. The main difference between these two, however, is the species of oak and the contents that came before it. French oak lends more spice and tannins to the spirit and along with the influence of the previous wine itself, can make for a wild and evocative whisky. Cask 94.5 ‘Vineyard mud guard’ is the quintessential example offering an exotic profile of old leather, fermented grapes and apple cider.

The history of the sherry butt dates back to the second half of the 18th century the traffic in American oak staves with Western Europe. Nowadays American white oak (Quercus Alba) is the preferred wood for the ageing of Sherry wines, although butts are occasionally made from Spanish or French oak. At 478-500 liters, it’s by far the biggest standard cask size in use across Scotland.

The first half of the 19th century was a period of great development in the wine trade of Jerez and from here thousands of butts of wine were exported, mainly to England, a practice which continued until well into the 20th century. In many cases the wine would remain in the butts for months because on top of the preparation time in Jerez and the long journeys by ship, it might be stored in warehouses at its destination before being blended to suit the English taste. You can imagine that all those delicious fortified flavours leached into the wood make for some equally rich whisky! Most whisky that’s either had full maturation or finishing in sherry casks tends to have rich fruit cake, spicy sultana, and cremé brulee flavours. Something like Cask 139.5 Midnight espresso or G8.6 Soothing the mind for an opulent and delightfully rare experience in the glass.

Learn more about casks, and taste all the flavours of the Society rainbow, by being a member of the world’s best whisky club. Events around Australia every month, whisky education every week, and a Partner Bar network like no other.