To be able to say that we’ve got a single cask up for grabs from 1974 for members is truly astounding. Also helps that it tastes rather delightful!

Introducing Cask A2.2 Enchanted woodland stroll to the SMWS. A single cask, cask strength, panel approved, second ever cask from Armagnac distillery 2 in our lineage, and bottled after 44 years in Gascon black oak.

Armagnac is the oldest French eau-de-vie, dating back to the early 14th century, with evidence of distillation taking place at least 200 years before cognac was being produced. It is produced in the Gascony region in the south-west of France under the guidelines of its own industry body, the Bureau National Interprofessionnel de l’Armagnac (BNIA). Like cognac, armagnac has been recognised as an “Appellation d’Origine Contrôlée” (Controlled Appellation of Origin) since 1936. But the difference in both production processes, grape varieties, volumes and in the character of the two spirits is considerable. 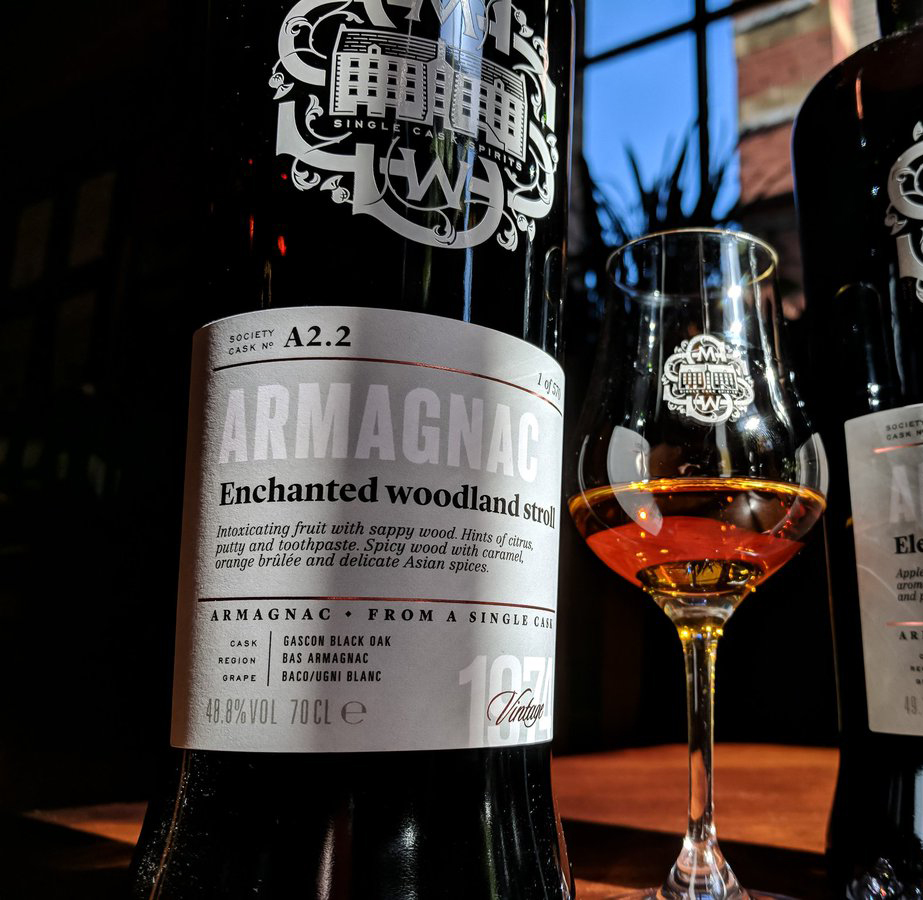 Armagnac is still predominantly produced on single estates by families rather than larger houses or conglomerates, on a much smaller scale to cognac. “The angels’ share in cognac is five times the annual sale of armagnac,” as one producer told the SMWS.

There are around 800 wine growers in the region, but many of them don’t own or operate their own stills, known as alambics. Many farmers sell their grapes to distillers. There are also négociants, who buy eaux de vie from distillers, then age and blend them themselves to produce armagnac. Other farmers still rely on mobile distillers who tow their alembic – often wood-fired – from farm to farm, distilling the wines according to the specification of each house.

There is no town called Armagnac – it’s a historic county of the Duchy of Gascony that gives its name to the drink. Gascony itself is tucked away south of Bordeaux and west of Toulouse, and a decree from 1909 dictates three departements where armagnac can be produced: the Gers, the Landes and the Lot-et-Garonne. Within the three departements are the three terroirs that define armagnac: Bas-Armagnac (57% of production), Armagnac-Ténarèze (40% of production) and Haut Armagnac (3% of production). Together, the three terroirs are home to 15,000 hectares of vines, in a temperate and gentle climate, but each terroir has its own distinct soil and produces different styles of armagnac.

Although 10 grape varieties are allowed to be for armagnac production, four are most commonly used. These are:

Ugni blanc (55%) – the most widely used variety, giving acidic and low alcohol wines. Whereas it makes up just over half of the grape varieties used in armagnac, ugni blanc makes up more than 95 per cent of cognac.

Baco (35%) – previously known as Baco 22A, this is NOT used in cognac. Baco is a hybrid of Folle Blanche and Noah varieties named after its creator, François Baco. He developed it in the late 19th century following the phylloxera crisis, to be more resistant to disease. It contributes roundness, smoothness and aromas of ripe fruits. It is also the only hybrid that is permitted for use in Appellation d’Origine Contrôlée wines.

Folle blanche (5%) – the oldest and, before the phylloxera epidemic of the 19th century, the best-known variety used in armagnac. It produces fine and floral eaux-de-vie, but because it is more fragile and susceptible to frost its production has now become quite rare.

Colombard (5%) – widely used in table wines, but distillation for armagnac is rarer. Its fruity and spicy aromas are appreciated in blends.

HOW IS ARMAGNAC MADE?

The grapes used to create the wine for distillation are harvested from September to October, and the addition of any sulphur treatment or sugar is forbidden. Distillation takes place during the winter once fermentation has finished, with a deadline of 31 March of the year following the harvest.

One of the key differences between armagnac and cognac is that 95 per cent of armagnac is only distilled once, and distillation is done using a specific form of continuous still – the Armagnac alambic. Up to 30 per cent of distillation is still carried out by travelling alambics that make their way from farm to farm, using LPG or even sometimes still wood as fuel for distillation.

The armagnac alambic allows the wine to be pre-heated in a cylinder by the pipes containing hot alcoholic vapours from the still. The wine then flows over a series of plates in the main column, clashing with the alcohol vapours produced by the heated wine in the lower half of the still. 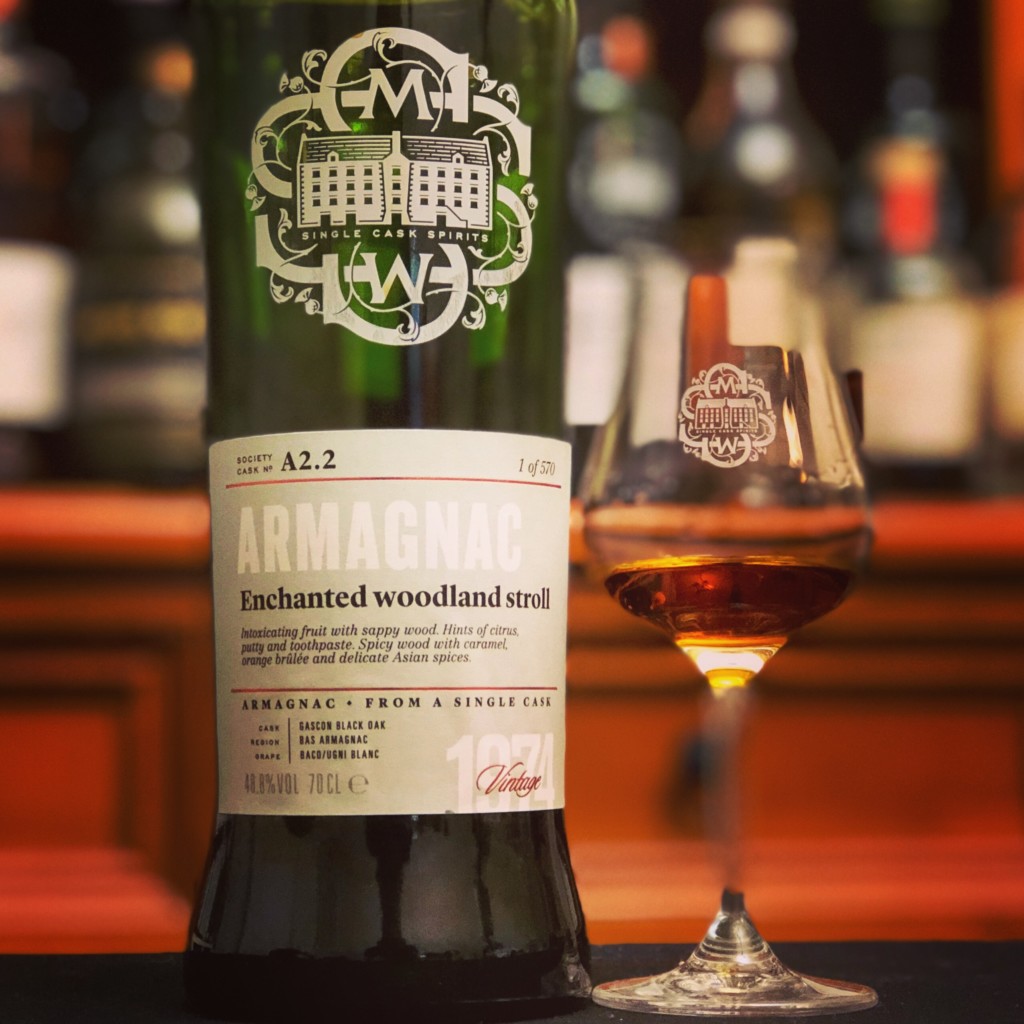 Strength can be controlled depending on the number of plates, their position in the still and the flow rate of wine through the still. Armagnac can legally be distilled from 52% abv to 72.4% abv according to AOC production conditions, but traditionally the strength is around 52-60% abv.

Once distillation is underway, it carries on 24 hours a day and becomes the focal point for a celebration for the farm and the local community. The period of distillation from the end of October to around the end of January is known as La Flamme de L’Armagnac, a rolling festival of events across the entire area.

Cask 2.2 Enchanted woodland stroll is available now only from smws.com.au and only to members of the Society. This 44 year old single cask rarity is a truly magnificent piece of distilling history from 1974 and should be opened and enjoyed. Slainte!