To properly examine the effects of technology in distilling and how it’s changing the game, we need to really go back in time to begin with.

Where was distilling first discovered? Always a hotly contested subject among whisky buffs, as some say that the first use of distillation occurred in China, Egypt, or perhaps Mesopotamia. This ‘distillate’ was then mostly to create balms, essences, and perfumes. The first recorded examples however for spirit was somewhere in the fourth century B.C. where Aristotle suggested the possibility of spirit distillation when he wrote: “Seawater can be made potable by distillation as well and wine and other liquids can be submitted to the same process.” He wasn’t wrong!

Civilisations in almost every part of the world developed some form of alcoholic beverage very early in their history. The Chinese were distilling a beverage from rice by 800 BC. There is sketchy evidence to support the Romans were doing so at the same time, but by 100AD they certainly were. Further, there’s writings and evidence that the French, Spanish and Portuguese were distilling wines then, limited until the 8th century after contact with the Arabs.

Over time, technology has constantly changed how distillate is made, improving on old methods to produce spirit, and refining the process, or in some cases, modifying it beyond belief. One of those major changes happened in the 11th century when Avicenna invented a coiled pipe which allowed the plant vapour and stream to cool down more effectively than previous distillers that used a straight cooling pipe. This kind of innovation changed spirit forever. That’s essentially a technological change in spirit development that has shaped it for centuries since.

Scrolling a bit further along in history, we can thank the Turks. Perhaps not for their invasions of Europe during the 14th and 15th centuries, but for what they left behind including once-strongly held secrets from their civilisation. Their development into the ‘al-ambiq’ or as we know it today as ‘alembic’ still, was one of those secrets that ended up in widespread use across Europe as a result. Two vessels connected by a tube and used to create an alchemical reaction via heat. What an innovation that we take for granted now! 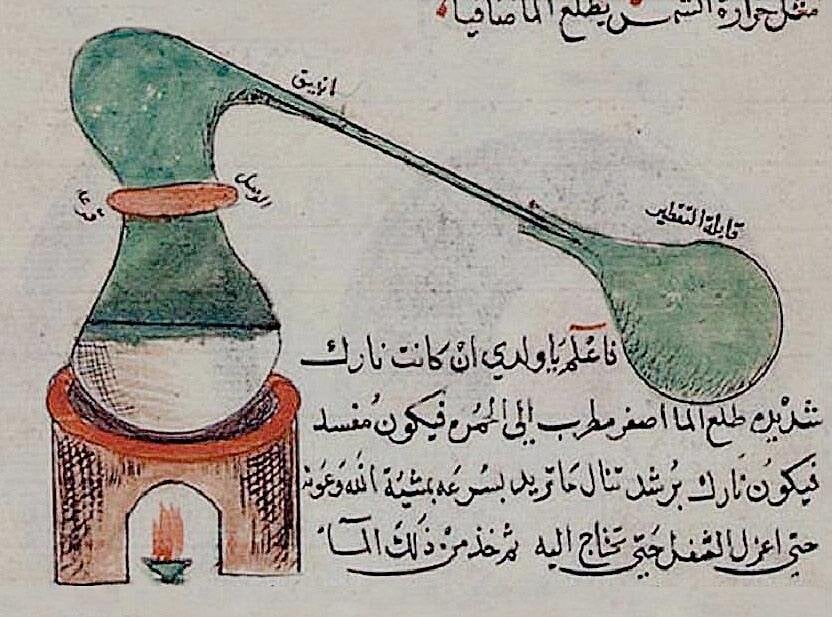 That alembic still for quite some time still held the dream by alchemists that it would produce pure gold from the use, but instead ended up making lots of acqua vitae, or eau de vie, meaning ‘water of life’. Not originally made for enjoyment as we do today, but instead praised for their therapeutic qualities and even pharmaceutical ones with reports of distilled spirits offering a feeling of relaxation and well-being. I’d agree with that even today! It was then in 1526 Paracelsus used a water bath, or known then as a ’Balneum Mariae’, for the first time. It prevented the flask from cracking while heating up, and stabilised the liquid’s temperature. The vapour cooling system was also improved.You have to remember however that back in 1526 the spirit was being enjoyed across the world in different ways, but almost always straight from the still, likely always single-distilled, and at ‘still strength’ in most instances. The ‘accidental ageing’ that a wooden cask did to the spirit come the early-mid 1800’s from the spirit traveling around the world on a vessel was an innovation and relative technological marvel.

So scaling a period of nearly 2,000 years, we’ve seen some incredible developments in design, construction, and shaping how spirit tastes. But what about the last 50 years or so? Many writers and futurists will claim the rate of human progress and technological development is accelerating, and I’m inclined to agree. We’ve seen mass-scale of coopering and wood management, diversity of spirit increase at the same time as homogenisation, and in more recent years an explosion of new distilleries across the whole world producing the widest array of interesting spirit. Even in this very Outturn we have one release that is a proper ‘new world’ whisky distillery out of Wales that makes a single distilled spirit, and we also have a genuine historical timepiece out of distillery 24 that will transport even the most jaded sherried whisky fan to another decade. It’s like pitting a Delorean up against a Tesla… In other words, technology moves on, the rate likely increases, and we, as the whisky appreciators can take this journey with open palates with the Society, and continue tasting, sharing, discussing, and look forward to the future.