September each year is all about the Gathering. A global coming together of members across the world to celebrate the joy of whisky camaraderie. The joy of sharing great single casks with flavour adventurers at the SMWS.

One of those casks is a full cask exclusive to Australia, Cask 26.147 ‘So many colours in a rainbow’. Let’s read more about the history and story of this great distillery behind the release:

Clynelish is the most northerly outpost of the UDV (Diageo) empire, and after Wolfburn and Pulteney, the third most northerly distillery on the British mainland. The modern-day plant, located just off the A9 on the northern outskirts of the Sutherland golf and fishing town of Brora, dates from 1967, and is architecturally somewhat characterless when compared with its non-producing predecessor, which still stands close by.

The original Clynelish is a classic example of elegant distillery design, with a dominant pagoda and well-proportioned warehouses, while the late whisky writer Gordon Brown once compared the replacement construction to a biscuit factory, and Jim Murray describes it as a ‘shoe-box style distillery’. The fact remains, however, that whatever the plant may look like, it produces one of the most highly-regarded single malts in the Highlands. 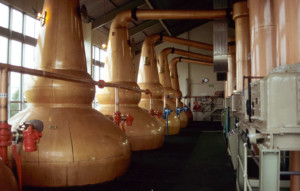 The whisky made at Clynelish has long been held in high regard by connoisseurs, and it was a particular favourite of the literary historian Professor George Saintsbury – author of Notes on a Cellar Book – especially when mixed with Glenlivet, though his usual practice was to add Talisker, Glen Grant and an Islay malt. Perhaps the Society should consider a members’ competition to create the optimum Saintsbury Vatted Malt.

Clynelish is also noted for its sometimes quite startlingly ‘west coast’ characteristics. More than one highly experienced taster has been fooled into believing that the Clynelish in his glass is an Islay rather than a Northern Highland malt, such is its peaty and seaweedy nature. Distillery manager Bob Robertson’s personal description of his whisky is “slightly smoky with a fruity bouquet. Despite what some people say, the taste of the sea eludes me!”

The old distillery frequently used highly- peated malt, while the ‘new’ Clynelish uses a much more medium level of peating. The original distillery was founded in 1819 by the Marquis of Stafford, who later obtained the vast Sutherland estates by marrying the daughter of the Duke of Sutherland, he was the pre-eminent figure in the Highland Clearances, during which some fifteen thousand people were removed from the half a million acres of Sutherland land alone to make way for the more profitable ‘crop’ of Cheviot sheep. The distillery was built to utilise the cheap grain which was subsequently produced by tenants who had been ‘cleared’ to the coastal margins of the Sutherland lands. Another factor in the distillery’s construction was the existence of a nearby coal field, mined since the sixteenth century, but the coal it produced was of poor quality and limited quantity. Local peat bogs also provided fuel for the malting process. James Loch, land commissioner to the Marquis of Stafford, wrote in 1820 that “The first farm beyond the people’s lot is Clynelish, which has recently been let to Mr Harper from the county of Midlothian. Upon this finn also there has just been erected a distillery at an expense of £ 750. This was done to afford the smaller tenants upon the estate a steady and ready market for their grain without being obliged to dispose of it to the illegal distiller.”

Successive licensees at Clynelish after James Harper, were Andrew Ross and George Lawson, then in 1896 the distillery was bought from the Sutherlands by the Leith blending firm of Ainslie and Heilbron, who substantially rebuilt it. In 1912 that company went bankrupt, and Clynelish passed into the joint ownership of the Distillers Company Limited and John Risk, who was bought out by DCL thirteen years later.

The distillery was operated by the DCL subsidiary of Scottish Malt Distillers, and was closed during the depression years of the 1930s. After the Second World War, demand for Clynelish grew apace, and the old distillery with its single pair of stills eventually became a victim of its own success, as demand out-stripped supply capabilities.When, in 1967-68, a new distillery was built on land adjacent to the existing plant, the replacement was called Clynelish, while the old distillery was re-named Brora, operating alongside the new distillery from 1975 until its final demise during the DCL cutbacks of 1983.

Bob Robertson is an affable Aberdonian who became assistant manager at Clynelish in 1967, just as construction of the new distillery was ending, and he subsequently took up the manager’s position at Banff and then Dalwhinnie before returning to Clynelish in 1990. The issue of what is ‘Brora’ and what is ‘Clynelish’ whisky is cloudy to say the least, since the make of the old distillery was called Clynelish prior to 1967, after which casks were stencilled as Brora, though they were sold for fillings as Clynelish!

Clynelish draws its water from the Clynemilton Burn, once the water source for the town of Brora, and has six wash stills and six spirit stills, producing in excess of 3 million litres of alcohol per year. According to Robertson, “we work flat out for a fifteen shift week,” and in addition to its use in blending, UDV currently offers four ‘in-house’ expressions of Clynelish single malt. Clynelish employs a total of fourteen permanent staff, and attracts between ten and twelve thousand visitors per year. It is not one of the six distilleries recently chosen by UDV to benefit from enhanced visitor facilities in the future, and the impressive welcome currently on offer to members of the public is largely a result of shrewd budgeting and an organic approach to promotion on the part of the distillery staff.

Cask 26.147 showcases the best of this distillery’s character and history beautifully with notes of mango juice, orange marmalade, pink fairy floss, fresh apricots, waxy lemons and berry squash cocktails. Available from Friday 4 September in our action packed September Outturn for the Gathering. Not a member of the Society yet and want access to these incredible whiskies, deeper whisky learning, events, and more? Join here.