Home/SMWS Worldwide, Thoughts and Musings, Uncategorized/Deciphering the Hashtag
Previous Next

Although I technically qualify as a millennial, even I can get overwhelmed by the overuse of hashtags. They often get thrown around with wild abandon, and one would be forgiven for thinking they are unimportant and do not contribute to carefully crafted content.

Many members may have seen these tags, or used them in passing, and not given much thought to the meaning that lies behind the hash. So below I have attempted to dissect that meaning, and encourage members to act on some of the messages we can draw from this seemingly simple social symbol.

It is a wonderful feeling on Outturn Day (or First Friday as it is often referred to in the UK) to get a bottle of that particular cask you’ve been eyeing, and know that there is 700mls of delicious single cask goodness heading your way. It arrives on your doorstep and you open it to pour yourself a dram. Upon nosing and tasting it is everything you had hoped, and you are very happy with your purchase, so what would most people instinctively want to do next: tell someone about it.

The various social media platforms that have birthed the hashtag have also created a perfect outlet to share those thoughts, tasting notes, and comparisons with other releases from that distillery or in that cask type. This is definitely a nice component of sharing (#influencer). However, how much better is that experience when other people have also tried the same whisky and can engage with you, either by agreeing and celebrating the liquid or by disagreeing and fostering some excellent discussion about different flavours and preferences.

With Society bottlings, this is not always easy as some have very low allocation or sell very quickly. In this “adversity” (#firstworldproblems) is where the real generosity of so many members can be seen. A good friend of mine always says that the taste of whisky is (1) mood, (2) palate and (3) environment combined, and two of those can be enhanced no end by sharing a sample, doing a bottle split, buying a gift (either bottle or membership) or gathering with friends and family to live the experience together. 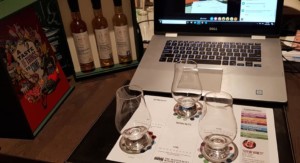 A somewhat controversial handle, as those with a large horde of sealed bottles can interpret it as a personal attack. Members may also have seen it expressed as #sipnotflip, one of my personal favourites. However, there is a big difference between people who end up having more bottles in their cupboard than they can drink responsibly, and those that buy whisky with the intention of doing something other than enjoying it for the delicious amber liquid that it is. As my friend Phil Storry from the London branch once characterized it, accumulators and collectors respectively.

I am constantly fascinated when I show someone a rare or special edition Society bottling, offering them a taste, and they say in a puzzled tone “wow, you opened it, why did you open it?”. No judgement (#actuallyjudging) but it shows a very different attitude and approach to whisky. For me, it’s not whisky until the drink is enjoyed, and until then the person has just spent their hard-earned money on a very attractive piece of decorative glassware.

So while it is your whisky and you can do whatever you like with it (#idwiwwiw), if you are a collector rather than an accumulator, this hashtag serves as a signpost reminder that you probably have the wrong forum to talk about whisky as an investment or display piece, as the Society has always been all about the drinking experience.

It has fast become a bit of a battle cry among the whisky nerds, with talk of merchandise and a secret handshake. For those who haven’t deduced, the statement is one of support for the use of refill bourbon casks for maturation. On the face of it, the group may appear to be saying that refill bourbon is the best or only cask for whisky, when in fact it is more complex.

The movement (that’s right, I’m calling it a movement) is in response to a prevailing or at least very vocal view that refill bourbon is the least desirable form of cask. Being generally cheaper and more readily available has led to the perception in some corners of the whisky community that it is inferior. It is certainly true that Society sherry casks don’t stay on the shelf for long (#sherrybombs). This perception also shows the level of importance some people place on the details of the cask type, as opposed to the other variables such as spirit and integration.

Now there is nothing wrong with having a palate preference, and there are pronounced differences between sherry, bourbon, port, wine and other wood types, but when you allow that to dominate your interest to the exclusion of all other options you will definitely miss out on some fantastic whisky (#whiskywithcharacter). In fact in many ways refill bourbon is one of the best cask types to bring out the quality of the spirit, as it is not being overpowered by the previous fortified occupant. The moral of this hashtag is simple and echoes my previous comments on code hunters (#dontbelievethehype), be open to flavour and not blinkered by a particular characteristic because it might be a very pleasant surprise.

A casual and fun phrase which has been widely attributed to Melbourne member Steve Oates, it refers to the very simple pleasure of enjoying a boilermaker on a relaxing Sunday. Due to the ever-growing number of craft beers and the extensive variety of flavours and aromas in Society whiskies, the SMWS is a great place to try to find that perfect boilermaker combination (#haufanahauf). With members like Franz Scheurer, and the knowledgeable staff at our Partner Bars, pairing whisky with food and drinks has been a part of the Society in Australia for a long time.

But as is the trend with these hashtags, there is a deeper meaning to be taken from this apparently superficial description of the act of having drinks on the weekend. It is an example that highlights the importance of member input. Coining these phrases and seeing how they spread through the membership is such an important part of being a whisky society, in the true sense of the word. For my part, I have tried to start the trend of #distillerydouble, encouraging members to share side-by-side bottings from the same distillery code as a showcase of the differences or similarities between drams. There are many others (#malternative) that have been started by members and create a real sense of community around the use of the tag. The wonderfully clever oxymoronic expression of the fact that all the elements of the SMWS that are so different from any other society are what makes it so special and brings all the members together. The flavour-first attitude, commitment to member engagement, global reciprocal membership, and the most iconic whisky code system in the industry makes the Society #oneofakind.

Members will experience and access the Society differently. Some who like to drink whisky alone may see it just as a bottle shop, others who love tastings and socializing may view it as an event organizing service. Some who thrive on participating in online fora might see it as an interactive blog, and others may even view it as nightly talk show and news service for whisky public service announcements thanks to the ubiquitous Mr Bailey (#whereisbailey) and his live streams.

Whichever element draws your focus, it is undeniable that the Society is greater than the sum of its parts, and there are always new facets for members to explore. Whether that is diving into a distillery code you haven’t tried before or introducing yourself to another member at an event or online, the SMWS will always support every member’s personal whisky journey and celebrate the different ways people can enjoy a dram.

Finally, it is very fitting that this is the month of The Gathering events. You will assuredly see this hashtag used regularly in connection with upcoming events and when you do, it will mean that likeminded whisky enthusiasts have gathered together to share a dram and talk all things SMWS. No hidden meaning or deciphering needed for this hashtag, but I hope that when you see it and the photos and comments that go with it you will get a warm feeling that Society members are enjoying great whisky in good company, and that you are one of us.

Written by VIC/TAS State Manager, Alex Moores, for our September Gathering Outturn 2020. Want to come on this adventure into flavour? Keen to learn more? Join a whisky club like no other, the SMWS today here.