Nostalgia – it’s a thing of the past

Nostalgia – it’s a thing of the past

One of the great discussion topics that vexes many a whisky enthusiast and ignites many strong opinions is the notion of whether or not whisky used to be better “back in the day”.

Even that statement by itself is contentious.  For when was back in the day?  Was it the 1960’s or 70’s, when blends still ruled the roost?  Was it the spirit distilled in the 1980’s – ironically at a time when the industry was in one of its lowest valleys?  Was it the 1990’s, by which time the current malt whisky boom was playing out its early moves.  The 2000’s?  Or was it just “back when you first got into Scotch”, regardless of the actual chronological time stamp?  This last one is clearly not objective, but is obviously co-connected to issues such as nostalgia, romance, and – most probably – rose coloured glasses.

Whether the proposal is true or not, there’s no doubt that the thought it could be true drives strong lust in all drinkers.  Witness the fever and excitement at any whisky gathering when an old bottle suddenly gets brought out.  It might be a Longmorn or Bowmore distilled in the 1960’s, or a Macallan bottled in the 1990’s – regardless, the gathered few will clamber over one another to try it, believing it to be an unrepeatable elixir, the heights of which can never be attained today.  We even see it in the Society, with – perhaps – undue focus and adoration now being heaped upon the old, archived white-labelled SMWS whiskies that were bottled from 1983 to 2009.  Rightly or wrongly, there’s a perception that “old is good”.

The other problem that exists in this space is how objective you can genuinely be when assessing old, archived bottlings – particularly if it was a whisky you drank and were familiar with back at the time of its original release.  I’ve been at many a whisky gathering with long-time dramming buddies and we’ve brought out something from the past.  Instantly, the whisky is on a hiding to nothing:  It stands on the pedestal you built for it 20 years earlier, yet it has to perform in the context of your present-day tastebuds and current whisky narrative.  And, so, one of two things happen:  The whisky is either everything you remember it to be (and usually more), OR it doesn’t quite live up to expectations.  More often than not, it’s the latter.

If it’s the latter, then you instantly begin to interrogate the whys and what fors.  Is the whisky the victim of that enigmatic “Old Bottle Syndrome” (aka Old Bottle Effect)?  Was the bottle poorly stored over the years and the whisky deteriorated due to extreme heat or exposure to light?   Did it oxidise in the bottle due to a less-than-perfect cork seal?  Or perhaps – just perhaps – maybe you let nostalgia get the better of you? 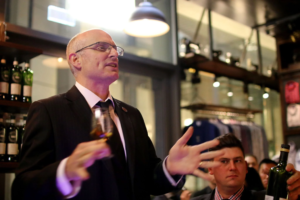 Of course, some people try and test the theory objectively by pitting two so-called “identical” whiskies from different eras side by side.  For example, you can acquire a 12yo Glenlivet (for the sake of this discussion) from the mid-1990’s and put it up against a 12yo Glenlivet from 2020.   One will certainly taste different to the other, and you can then decide which one you personally preferred or felt to be the better in quality.   Ha!  But here’s the catch – were you really comparing apples with apples?   Whilst the two whiskies came from the same brand and production house, albeit 25 years apart, the reality is that, chemically, they are anything but identical.

You first need to consider what was happening in the industry at the time.  In our example here, the two Glenlivet 12yo’s bottled in 1995 and 2020 respectively, were distilled in 1983 and 2008.  These are two very different eras with very different fortunes.  In 1983, the Scotch whisky industry was in absolute depression. Many distilleries closed between 1983 and 1986; plenty more were mothballed; production levels nosedived; sales were low; and whisky was not flavour of the month.  Budgets were tight and shortcuts were made to get by.  The little spirit being produced was thrown into casks – some good, some bad – and despondently put into a warehouse in the hope of rosier times.  Twenty five years later, by 2008, the single malt game was in boom times; production levels were high; and massive financial investment was occurring in distilleries and plant.  Investment in quality wood and re-racking into fresher casks was also the norm.

Production methods also changed significantly in the 25 years between 1983 and 2008.  The list is a long one, and it varies from distillery to distillery and producer to producer, but consider the overall impact and influence of the following factors:

I don’t mind looking back, and I certainly don’t mind tasting back from time to time.  But the Society has never been a backwards-looking mob.  Rather, it’s been on the frontier and continually faces forward.   Was the Society release of 2.80 from 2012 better than 2.116 in 2020?   Who cares?  I’m more interested in what 2.117 will be like…