What does the colour of whisky tell us about whisky?

Home/All Whisky/Whisky Basics/What does the colour of whisky tell us about whisky?
Previous Next

What does the colour of whisky tell us about whisky?

Can the colour of a whisky really reveal anything about how it will taste?

The biggest mistake in whisky appreciation, according to Chivas Brothers director of blending Sandy Hyslop, is judging a dram by its colour. So why do we continue to do it?

The basic answer is that it’s psychologically unavoidable – for better or worse, we make most of our decisions based on our eyes and how attractive or appealing something looks. For many drinkers, a darker whisky gives the perception of age, and the misconception that darker means older – and therefore better – is a tough one to shake off.

Richard Paterson, master blender at Whyte & Mackay, told Unfiltered in 2013 that: “Colour means consumer confidence.” When it comes to the use of caramel colouring, otherwise known as E150, to give consistency to blended whiskies, he told us: “The caramel added doesn’t affect the flavour, but any change in colour to something the consumer isn’t used to in their regular brand will affect how they perceive the flavour. They think the whisky is different if it doesn’t look the same, even when it isn’t.”

At The Scotch Malt Whisky Society we never add anything to change the whisky’s natural tone. What comes out of a Society bottling is influenced purely by the contact between spirit and wood in the cask, and the degree of colour development varies from one cask to another.

There are some general guidelines we can offer – American oak imparts a more golden colour compared with the deeper darker notes of European oak. But even if colour can provide an idea of the type of cask used, it says nothing about the whisky’s quality. 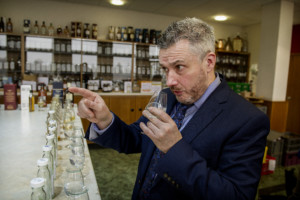 “Colour contributes as an indicator of what to expect, but it’s fascinating to see how similar casks can contribute different colour – just as they can be so different in terms of aroma and taste,” says the Society’s master brand ambassador John McCheyne. “That’s especially true with the SMWS, when you know for sure the colour is natural. It’s part of the overall experience and appreciating the journey.”

Society member Tommy Jørgensen denies the possibility of being influenced by the look of his dram. “Colour doesn’t matter to me,” he says. “For example, Cask No. 53.241: Dense smoke over a tarry deck was almost colourless, but the taste was like a slam in the face by a sea monster.”

Fellow member John Mallios says: “In terms only of the senses, a deep, rich colour triggers the eye and creates a nice effect, and on the tasting side, it gives an indication of length of maturation and type of cask – but it’s the nose and taste that matters, not the colour.” Previously, each Society Tasting Note came with its own colour description, agreed by the Tasting Panel and continually testing both their creativity and our capacity to make sense of a poetic reference, along the lines of “Vampire’s wedding ring”, “Glistening magpie’s hoard gold” or “Brazilian metropolis movie poster of 1926”. No, me neither…

This article originally featured in Unfiltered Magazine, which is provided to members of the SMWS as part of membership. Words by Richard Goslan.