Exploring a slice of French Oak

Home/Thoughts and Musings, Uncategorized/Exploring a slice of French Oak
Previous Next

Exploring a slice of French Oak

I was about to embark on a piece that could be so long it tips over the edge of being an article and into what we commonly refer to as a ‘book’, but decided instead to just focus on a brief rundown of one Society single cask we have on offer at the moment and the oak involved.

When talking about types of casks, for the overwhelming vast majority, it falls into American Oak, or European Oak. Today I want to talk about European Oak, or more specifically, French Oak and what it means.

On our current release of the absolutely sumptuous 35.151 ‘Curiosity Dram’, the label with full transparency clearly states ‘1st fill French Oak hogshead’. Let’s dissect that for a moment:

That’s a lot of detail about one cask! But one thing from all of this that I often like to remind whisky enthusiasts of: don’t get too caught up in the cask. I like to think of it like Pareto’s Law: 80% of the flavour of whisky comes from the cask, the environment, etc. The other 20% comes from the spirit. Often too much emphasis is placed on the cask with little regard for the spirit quality coming off the still, and sometimes heavy and rich wine casks can ‘mask’ or hide the spirit a bit. This is why I often love tasting the official distillery bottlings from these distilleries to see their ‘base spirit’ quality in a core expression, which is often ex-bourbon casks. A lot can be gleaned from this and over time you’ll develop an extra appreciation for the somewhat more exotic casks and even cask strength single-cask ex-bourbon expressions we bottle from that same distillery.

So that’s a lot of little detail that makes up a release like 35.151 ‘Curiosity Dram’. While to the casual drinker this may seem unimportant, for others you may find some fascination in the history of a cask and it’s effect on the spirit. This is all part of the Society ‘tapestry’ of fascinating oak management and depth of true flavour and character in a Society cask. Personally, the idea that we can enjoy a cask strength, single cask,  8 year old, 1st fill French Oak hogshead Glen Moray that’s been rigorously selected by our Tasting Panel, for only $145, is an absolute steal for a cracking good dram! 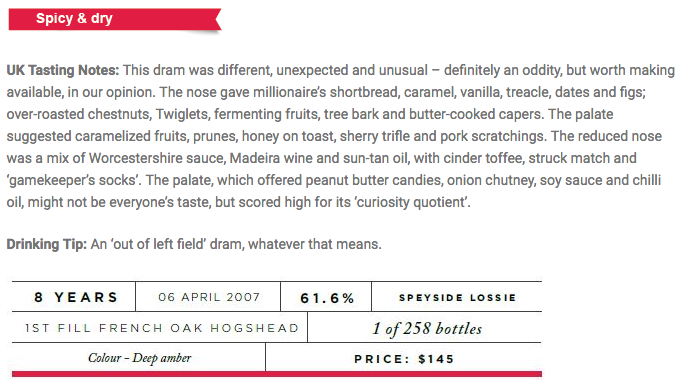