Home/New Release/Curious Caperdonich: A moment in distilling history
Previous Next

With something special landing in our July 2019 Outturn, SMWS Cellarmaster Andrew Derbidge recounts his experience and history of the mystical and demolished distillery, Caperdonich.

Very few distilleries close due to making poor spirit or their quality being deemed inadequate.  (Parkmore, back in 1931, and arguably Imperial in 1998 are two examples where quality was a determining factor).  Rather, distilleries are usually closed by accountants.  The facility is deemed either surplus to requirements; too expensive to run; or too expensive to overhaul and upgrade.  Caperdonich was all of the above.

The old signage at the distillery

The distillery started life in 1898 with the remarkable name of “Glen Grant No. 2”.  As the name would suggest, it was intended as a duplicate distillery of Glen Grant and was built directly across the road from the original distillery.  Glen Grant was enjoying tremendous growth and appeal, including international sales as a single malt brand.  Rather than expand the existing distillery, it was decided to simply duplicate it across the road.

However, in a case of bad timing, the bottom fell out of the whisky market at the start of the 20th century, and a raft of distillery closures occurred.  Glen Grant No. 2 was closed after just four years in 1902 and subsequently remained silent for the next 63 years!  By this stage, Glen Grant was again back in favour, particularly in Italy, where it had become the number-one selling whisky.   Glen Grant No. 2 was re-activated to help boost production, and its capacity was even doubled with the number of stills being increased from two to four in 1967.  In 1977, following a law change that forbade two distilleries having the same name, Glen Grant No. 2 was re-christened as Caperdonich. 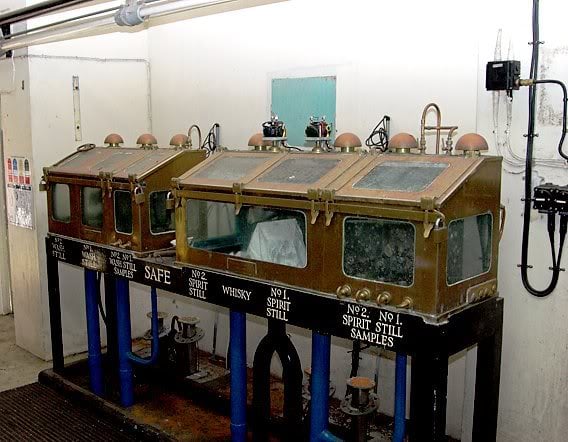 The spirit safe at Caperdonich back in the day

The distillery survived the tumultuous 1980’s and stayed strong in the 1990’s.  Whilst it was never bottled as an official bottling (OB) single malt by the owners, it evidently supplied plenty of fillings for the blenders, and many, many casks subsequently found their way to the independent bottlers – as evidenced by the number of single cask releases that have appeared in the last 10 years.  The Society has been one of the more prolific bottlers of Caperdonich.

Glen Grant and Caperdonich were part of the Chivas group when they were acquired by Pernod Ricard in 2001.  Pernod Ricard is a strong advocate for automation and efficiency, and perhaps the old distillery, which sat ignored from 1902 to 1965 was too difficult to bring into line with the company’s love for a streamlined facility? (Ironic, given that Caperdonich was significantly modernised in the late 1960’s and was one of the more advanced distilleries of that time, being able to be operated by just two personnel – a brewer and a stillman).  Regardless, Caperdonich was mothballed the following year in 2002.  (Glen Grant would subsequently be sold to Campari in 2006).   I was fortunate to visit Caperdonich and see around the silent distillery in 2009 – which was timely, as the distillery was completely demolished in 2010 when Pernod Ricard sold the site to its adjacent neighbour, Forsyth’s – the famous coppersmiths and stillmakers.

Whilst Caperdonich’s spirit shared many attributes and similarities with its sibling, Glen Grant, it never quite achieved the objective of being an exact duplicate.  It was, however, a wonderful example of Speyside whisky in its own right.  Light, floral, and with a sweetness typically associated with orchard fruits (particularly pears), it’s an interesting whisky to encounter today, given that the youngest bottlings are now pushing 17 years old and cask influence is overtaking the spirit influence.

Not a member and want access to these remarkable bottlings? Join here today.